If you are hunting for some inspiration on your next PR campaign PR Examples is a great resource for looking at the most recent and interesting things that are going on in the PR industry, and working in an intelligent PR agency obviously means that we all love nothing more than seeing brilliant ideas being executed cleverly.  After a long read I have decided to collate my top ten summer 2012 PR examples, see if you agree with me.

1. Porsche marketing stunt – We all know that very personal direct mail gets better results, but I have never seen anything as personal as this. In a plan to get more test drives of their cars Porsche took pictures of one of their cars looking like it was pulling away from some very fancy houses, then integrated the pictures into their flyers and posted them straight to each of the houses. The campaign got some greats results and five stars off me for innovation. Pfaff Auto: Instant Direct Mail from Lowe Roche Advertising on Vimeo. 2. Tesco Virtual Shops – Some cleaver mind in the Tesco PR department came up with the idea of putting up virtual shops in airports (on trial in Gatwick). This virtual shop lets passengers that are waiting to board flights order essentials to be delivered to their homes just in time for their return. I personally think that this is a brilliant idea, and cannot believe that it hasn’t been done sooner! There’s nothing worse than coming home to sour milk or no bread. 3. Cadbury send personalised Dairy Milk bars to Team GB athletes – With the Olympics being everywhere recently it’s only fair that we expect to see an abundance of Olympic related public relations, but I think this campaign is great. Just a simple idea, but who wouldn’t like a personalised giant bar of chocolate? 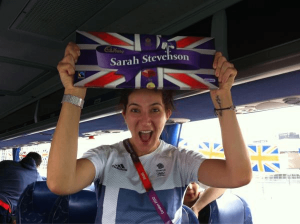 4. Coca-Cola machine swaps hugs for free drinks– I always love Coca-Cola’s vending machine stunts and their newest is no exception. In a world where a good hug can be hard to come by, what better than to be rewarded for your niceness than with a free can of coke. 5. Spraycation give’s Brits confidence – Millie Macintosh (Made In Chelsea) and ST Tropez fake tan, toured the UK offering shoppers a free spray tan, in a plan to get people to holiday in the UK instead of going abroad. I’m not sure whether this was more like a PR stunt for Millie and ST Tropez, but I admire the patriotic’ness behind it, and envy the people who got a free stray tan, so I still like it.

6. Post boxes painted gold to honour medal-winning GB athletes – I couldn’t make a top ten list of recent PR without mentioning the Gold post boxes. A big well done to the Royal Mail for doing something that has ended up meaning so much to our Olympic medallists, and got some great coverage.

(Image credit Thanks to Madacam on Flickr for the lovely picture) 7. Newcastle hotel replaces Bibles with Kindle versions in every room – There is not much to say about this one, just that it was a pretty good stunt for publicity. Controversial maybe, but surely that’s a great way to get some really cheap coverage?   8. Giant 3D street art unveiled in Madrid to promote Batman – I have seen loads of 3D street art pieces popping up, and I think they are brilliant. It may be a bit of a bandwagon that Batman has jumped (or is that flown) onto, but it still looks great and surely will be something that people are bound to share and talk about.   9. Male and female parking bays provide tourism boost – The Mayor in a small German town has taken the slightly controversial plunge and created male and female parking spaces. The male spaces deemed to have a higher level of difficulty. Despite being a women myself, I completely agree that men are better parkers, and am actually surprised that this hasn’t been done before. Getting international coverage for a car park by doing something so simple is brilliant. 10. Panda-Monium – Ok so flash mobs have been around for a while now and to be honest I think that they are a bit stale, but when it came to   Panda awareness week in early July I loved seeing Panda’s pop up all around London. Their live Twitter feed, and #HugaPanda conversation really got people involved and had everyone guessing where they were going to pop up next. So there you have it these were favourites but do you have one you want to share which you think should have made the top 10? If you do why don’t you share it with the rest of the Prohibition team right here?