British Boxing Blow-Up in a PR disaster for UK Sport

British boxing has taken another beating after the actions of former World Heavyweight Champion David Haye and Dereck Chisora brought the sport in to disrepute. Haye, who retired after losing the title to Vitali Klitschko, was looking to restart his boxing career by demanding a title rematch during the post-match press conference between Chisora and Klitschko, a video which has quickly spread across social networks.
However, Chisora took offence to Haye’s tactics and the two squared off in an impromptu brawl, with Haye’s trainer Adam Booth receiving a nasty cut on the head from a smashed bottle. Both men may now face jail time with Haye, accused of causing grievous bodily harm, facing the possibility of spending six months to ten years in prison if found guilty. Chisora stands accused of malicious injury and a threat which combined could lead to a six year prison sentence.
The saga must have been an embarrassment to World Champion Klitschko who was looking on from behind the microphones. He said, “I’m totally disappointed, it went a little too far, the sport of boxing shouldn’t be like that.” Having faced both men, he must have been relieved at the thought of possibly not having to face them again.
Both men are also facing the prospect of lifetime bans from the British Boxing Board of Control. The whole weekend of the fight has seen them face an onslaught of bad publicity due to the behaviour of the two. In the pre-match press conference, Chisora slapped Klitschko in what was seen as a complete lack of respect towards the champion which to him having part of the fight purse suspended.
The irony of all this is that it would be a stupid move for the BBBofC to ban the two fighters. Although having shown no respect towards their own sport and acted in an embarrassing manner, Haye returning to boxing to fight Chisora has the potential to be a high drawing match. Chisora will likely face a form of punishment from the Governing body, while the only way the BBBofC could deal with Haye would be to ban him for life as he is no longer licenced unless they were to broker a deal if he returned to the sport. Promoter of the Chisora vs. Klitschko bout Frank Warren has even hinted that the two fight each other and the winner receives another shot at the World Heavyweight Title. Now how much of a punishment is that? 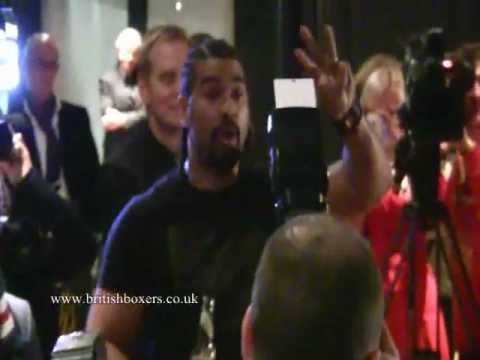